To begin this analysis I took a look at win/loss ratios in the 0-4, 5-8, and +9 rally lengths. The findings are quite interesting and tell a story that this match was decided in the 0-8 phases of the point.  The First Strike phase (0-4) and the Patterns of Play phase (5-8).  Yes, there were a couple of points in the tiebreaker set that at first glance seem to decide the match, but a closer look at the momentum changes in the second set reveal the reality of where the match was won and lost in the score.

The great news is that there is a distinct pattern where Amy can focus on improving in her practice sessions to stay on track when she starts a match strong or needs to re-focus and finish stronger.

Here are the numbers and I will go into some suggestions on how and where to train on the practice court.

From looking at this data of the win/loss ratios in each phase, it is clear that Amy did a much better job in the 1st set with regards to Returns.  She was +6 when returning in the first set and -7 in the second set.  What does this reveal?  It means that in the first set, Amy focused better on the R and R1 (2 and 4 ball), winning 4 more points over her opponent in the First Strike phase of the point.  (7 points won/ 3 points lost).

In the second set, Amy won 6 points and lost 9 points in the First Strike phase on her return of serve, and only won 1 point and lost 5 points in the Patterns of Play phase (5-8), that’s the 3rd (R2) and 4th (R3) shot for her in the rally when returning.

In the tiebreaker, Amy won 1 point and lost 1 point on the return, won 2 points and lost 3 points on the R1 (4th ball of the rally) – her 2nd shot when returning.  She broke even when Serving on the S and S1 (1 and 3 ball of the rally).  She won 1 point and lost 3 points in the +9 extended rally phase.  I’d like to point out that the focus should be “when” she lost points in the first strike phase, the majority of those points lost were at the beginning of the tiebreaker set.  If Amy could have won more points in the first strike phase of her return game early, this would have made a big difference in the score in my opinion.  Momentum shifted pretty heavy to her opponent in the tiebreaker set.  After playing the first 7 points, Amy only won 2 points.  The score was 5-2, Amy did make a comeback but it was really tough to get back ahead in the set.

I also tracked the Long/Short 2-point combinations, where a long point (+6) was played followed immediately by a short point (0-4).

Amy displayed great concentration in the first set with long/short 2-point combinations, but the second set and the tiebreaker set fell short in this area.

Here is the running score for the tiebreaker: name indicates player serving

Notice that when the score was 1-1, there was an 18-shot rally that Amy lost, followed by a 3-shot rally that she lost which made the score 3-1 in favor of Lauren.  Then Amy missed a R1 shot and now the score is 4-1 Lauren.  These back to back R1 misses from Amy gave Lauren momentum on her Serve game early in the tiebreaker.  The other notable time was when Amy was serving down 4-5, played a 12-shot rally point and lost (4-6), then followed by a S2 miss (5th shot) to go down 4-7.  This was another big momentum shift for Lauren.  Amy fought back though but in the end her return game in the tiebreaker was where the match was decided.

My analysis rest on 2 specific areas of training for improvement based on these match numbers.

This was a very close match and could have gone either way in the tiebreaker, Amy was a strong competitor in the tiebreaker.  I believe that if she would have returned better in the 2nd set, the match would have ended there with a victory for Amy, most likely 6-3 or 6-4. There were 3 games in the 2nd set that only last 4 points when Amy was returning serve, the 3rd, 5th, and 11th of the set.  Amy lost 2 out of 3 of those return games, the 5th and 11th game.  In both of those games, she did not earn a single point.  There were 12 games played in the 2nd set.  Interesting enough, the last point of the 2nd set and the tiebreaker set both ended with 10 hits however the match was not decided in the +9 extended rally phase. 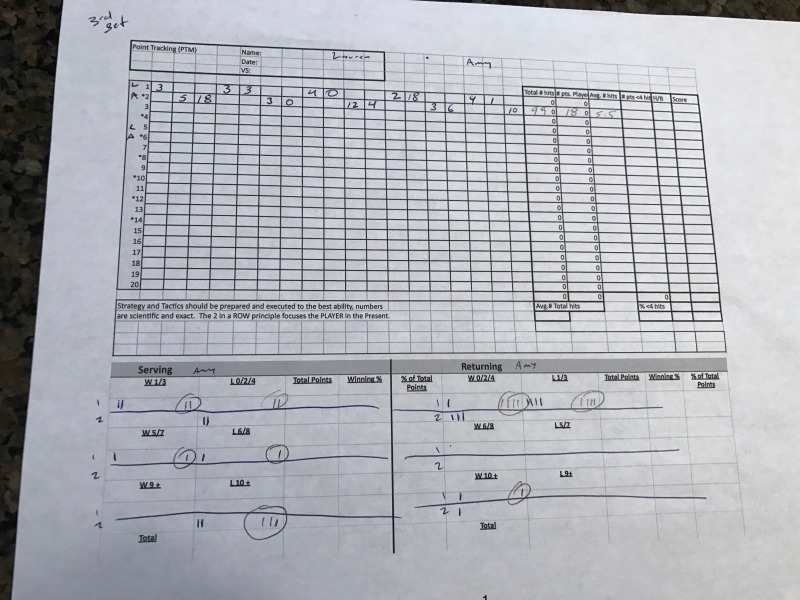