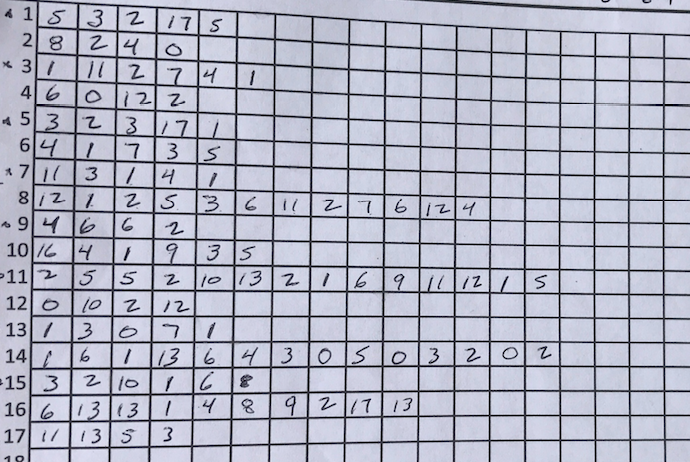 Why are numbers important? What can they tell you about how to win more points? The number 2 in tennis is the predominant number because of its link between the average rally length of a point and how a game, set, and match is ultimately won. One of my favorite shows that I like to watch on Amazon Prime TV is called NUMB3RS. The storyline of the show is based in the Los Angeles office of the Federal Bureau of Investigation. Special Agent Don Eppes and his team investigate critical and baffling crimes with a special edge. That advantage is Don’s brother, Charles Eppes, a brilliant universalist mathematician who uses the science of mathematics with its complex equations to search out the most dubious criminals. With this team, the forces of evil learn their number is up. Numbers have a way of giving clues to the patterns and responses that follow certain actions of human behavior.

I have always been fascinated with numbers, through high school and college I excelled in math above all other subjects. Because of this love for numbers, when playing sports, I looked for the odds of something about to happen or occurring in real time. Playing multiple sports growing up, I became increasing aware of player’s reactions and responses to the types of patterns executed as well as the number of times a play or sequenced pattern occurred. As a quarterback in football and point guard in basketball, it was my responsibility to call the play to execute based on the patterns I observed from my opponents (the defense). Many times, even as young as 9 years old, I would call a play instinctively during a game without the coach’s guidance. Even when a play was called from the sidelines, I would notice how the defense was set-up and based on the number of players to one side or the other, I would change the play and successful execute against the predictable pattern reactions of the other players. I began to realize that I just didn’t see things the way others did at first glance. My intuition was to drill deeper into the process of noticing how my opponent reacted to the movement and direction of the player and the ball. What I really wanted to discover is ‘why’ players reacted in particular ways? Was it their foot speed? Were they looking for a play or pattern we executed time and time again? Were they anticipating with their eyes what was happening in the moment or what just happened in the past? Or, were the other players simply not engaged in the game, were they just not aware of the play?

When Craig and I met in 2014, two years after I’d launched the project Transforming the Practice Court, we talked about the drastic differences between the practice court and the match court. We discussed how players were practicing habits and training with methods that were unrelated to how they actually will play points. Because the Serve and Return are rarely included when players rally in practice, the practice point scenarios often fall short in representing how points actually flow in match play. Our independent discoveries that match point play is dominated by the short rally, as well as the patterns of play that seemed to repeat themselves over and over again, was something we felt compelled to share with the tennis community.  You can watch more of our conversation in Craig’s online course, The First 4 Shots. Visit his website at http://www.braingametennis.com. With that in mind, I’d like to take you on a journey to discover that learning to play the game of tennis is much more than how to hit a tennis ball.  It’s about where and why you hit the ball that makes the biggest difference between winning and losing points. Winning more points is about practicing the specific movement rhythms and patterns of play that show up in your match play again and again as the serve and return are included to begin a point. There are only a limited number of shot responses in each scenario and the first step is understand what they are and why they keep showing up repeatedly. You will win more points if you can discern these patterns and then execute them with patience and precision. Finding the patterns that work best for you is the key to playing your best game. Many times that includes you being more versatile in your patterns and adjusting to changes that occur during practice and match play. In my online course that is linked to this book, Transform Your Practice, you’ll discover in the course the best patterns that give you the most confidence when playing points in practice so you can transfer that confidence to the match court. The practice strategies in the course are based on 2-shot combinations that occur in the First Strike and POP (Patterns of Play) phases of a point to help you move forward to simplify your tactical play. Automation is a huge part in playing at a high level in tennis because there’s never enough time to think in the moment. Knowing the right shot to hit at the right time is the beginning of executing better and making more shots. Training your technique in the context of automating your tactical patterns is a dynamic strategy that will make a world of difference as you practice to play your best when it counts. The course takes you through the most important foundational patterns of play for the first 4 shots you will play in a point. Practicing these foundational patterns will enhance your ability to proactively respond to your opponents shots more often and launch you more into flow. Approximately 90% of all the points you will play in a match will end within 0-8 shots, you must execute the first 4 shots on your side of the court with calculated patterns of play.  Making these First Strike and POP patterns automatic in your mind through repetitive practice is your greatest advantage over your opponent. Automatic responses calm your thoughts, emotions, and even your physical reactions to the ball. Flow is the optimal state of feeling and performing at your best. What you focus on, how you focus, when you focus, and why you focus are the gateways to more flow in your game. They all have to sync together fluidly and effortlessly. To be your best on the match court, you must practice how to focus and then re-focus from point to point. Beginning a point with more automatic pattern responses is absolutely critical to mastering the way you focus and re-focus to play the next point. You may have practiced and worked hard at how to hit a tennis ball in the court. At the same time, the intentional practice and automation of your patterns in the first 4 shots you’ll play is the game-changer to winning more on the match court.